The U.S. Food and Drug Administration (FDA) is asking food manufacturers and restaurants to cut the salt in their products over the next 2.5 years, hoping to reduce Americans' overall sodium intake by 12%. The goal of this new recommendation is to reduce the rates of heart disease across the country.

Heart disease is the leading cause of death in the United States. A reduced-sodium diet for Americans could significantly impact hypertension, heart disease and stroke for the better. The recommendation covers a variety of foods, including chain restaurant meals, processed food in grocery stores and baby food.

"We recognize that cutting down on sodium in your diet is hard to do on your own, because about 70% of the sodium we eat comes from processed, packaged and prepared foods." - Susan Mayne, director of the FDA's Center for Food Safety and Applied Nutrition

The new recommendation of a 12% cut in sodium would bring personal daily intake down to 3,000 milligrams each day. While that doesn't quite reach the daily goal of 2,300 milligrams, the FDA says it's a good first step.

The FDA said it would observe the food industry and reward companies that comply over the coming years, though specifics on rewards were not offered. Experts hope the federal push might increase the likelihood that most major manufacturers follow the recommendation.

Monitoring your daily sodium intake can have significant health benefits, from reducing your risk of a heart attack or stroke to lowering your blood pressure. Exercise and an overall healthy lifestyle, in addition to a low-sodium diet, can help keep your blood pressure within the healthy range. If you have concerns about your sodium intake, please talk with your doctor. 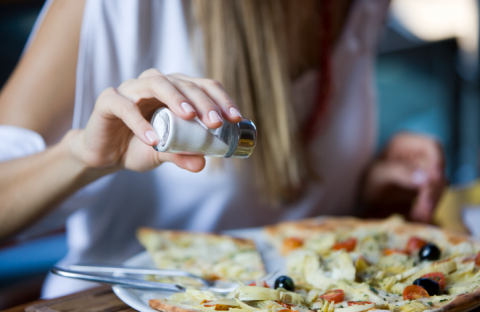